Just when I thought things would go quiet on the "bee and wasp" front I received a phone call first thing this morning from a lady with an Asian Hornet nest in a cavity in a stone barn wall.

Due to the awful weather in most of France for the first 6 months of 2013 all "wasp" family species have had a bad year with a reduced number of successful colonies and a late start for those that finally got going. 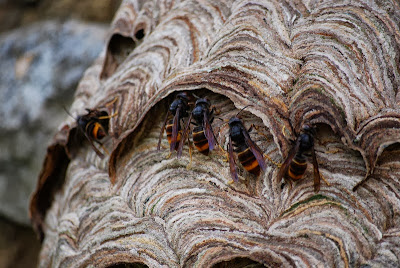 This one had grown rapidly in the last 5 or 6 weeks, outgrown whatever space they had inside the wall leading to a requirement to expand the nest outside of the wall. Still very active, continuing to grow and at head height from the ground the nest was becoming a danger to the householder, her dogs and horses. Of course this is also one of those cases with an introduced species where destruction is a necessity especially if there is a likelihood of next years Queens being killed and reducing the number of colonies next year.

Always sad to have to destroy such a beautiful creation and kill the occupants. 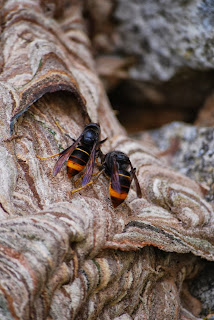 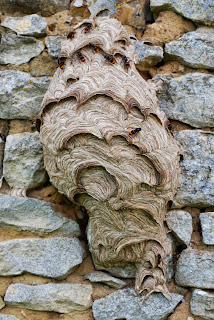 As far as I am aware this year, 2013, has produced some of the first examples of Asian Hornets making nests in cavities since their arrival in France in 2004. The usual place has always been in the open suspended from a tree branch or in bushes. Whether this indicates an actual change in behavior or simply a result of the bad weather preventing them from moving the initial nest remains to be seen. Certainly it would make their destruction easier than attempting to reach them 30 meters up a tree.