It’s no exaggeration to say that increasingly the arable lands of are becoming environmental wastelands as the same crops are grown time and time again, often on the same land with no rotation and an ever-increasing input of chemical fertilisers and use of pesticides. Manure from cattle and goat sheds is often added to the land in a raw form without being composted which greatly reduces its usefulness and in recent years with the growth in industrial poultry farming and egg production, the vast quantities of waste from these processes are often used. Even if we leave aside the manner in which livestock is treated these days the use of the waste in such a manner, whilst it may have apparent short-term gain, leads to imbalances in the soil that is already little more than compacted dust.

The main autumn sown crops of barley, wheat and oilseed rape tend to be harvested by the end of July with maize and sunflowers usually harvested in September and October. Other crops are grown in very much smaller quantities such as Buckwheat, Hemp, Tobacco, Sorghum, Fodder Peas, Field Beans, Alfalfa and others. A more concise list will be provided at a later date with their uses as well as any benefits or negative effects on the wider environment. 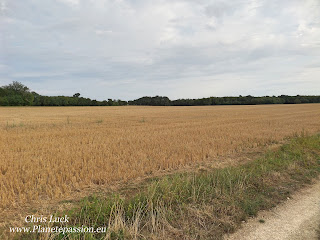 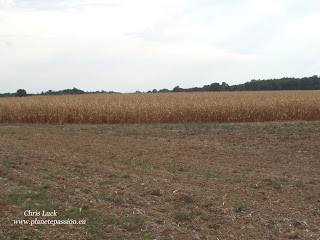 Photos above of dry August fields in France with not a flower to be seen.


A major problem is that by the start of August there are no flowers, or very few, and only vast expanses of bare ground or crops, (maize and sunflower), that are turning brown. Overall this leaves the environment seriously depleted of anything to provide nourishment for other species whatever they may be and we have all seen the reports of the decline in bird and insect numbers.

As a Beekeeper as well as being passionate about the environment and our native species I would be dishonest if I didn’t admit that I find the situation disheartening at times but this isn’t a groan or a moan, it’s about simple things that can change everything and in understanding that we can make things better, not ideal or perfect, just a bit better.

One such action took me by surprise 3 or 4 weeks ago when following the wheat harvest one of the local farmers sowed a field of around 20 to 25 hectares with a buckwheat and phacelia mix as a cover crop. This is something completely new around here and the difference it has made is outstanding and not just for my bees and all the other honeybee colonies in the close proximity. 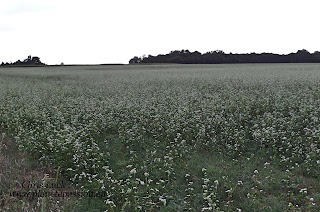 Photo above of field with buckwheat and phacelia

This mixture sown as a cover crop has a range of benefits and is ideal in this situation; both are fast growing and accept poor low fertility soils.
Buckwheat starts to flower in 3 to 4 weeks following sowing and continues for 3 to 4 weeks.
Phacelia is somewhat slower to mature and starts flowering in about 6 to 8 weeks following sowing and can continue for another 6 to 8 weeks. 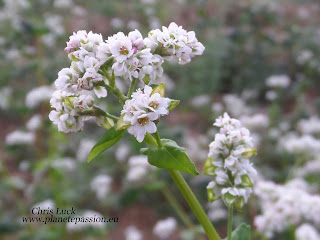 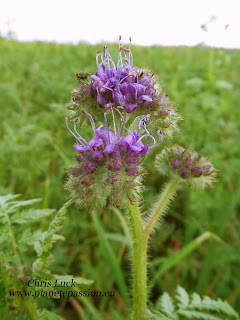 Photos above - Buckwheat on top, Phacelia beneath.

Both plants prevent nitrate leaching and take up useful minerals that are incorporated back into the soil when turned in and they both produce abundant biomass as well as acting as weed suppressants.  Of particular interest is the ability of Buckwheat to solubilise and take up phosphorus that is otherwise unavailable to crops and then release these nutrients to later crops as the residue breaks down.

The wildlife value when sown in late summer cannot be overstated at this critical time of year when little if anything else is flowering. They have incredibly high nectar and pollen production that provides for honeybees, solitary bees and bumblebees as well as hoverflies, butterflies and a vast range of other insects many of which provide valuable food for other species and of course the swallows as they prepare for their long migration.

If all arable farmers did the same with part of their land the cumulative effect could go some way towards helping prevent the continuing declines we have been witnessing in recent years. I will certainly be saying a big Merci to the farmer when I see him next in the hope he may continue or even expand this process in future years.