The tragic decline of the Red Kite in France continues.

I remember back in the early 1990's when we lived in mid Wales being able to regularly see a couple of the UK Red Kites that there were remaining at that time and all very secretive it was, not something to be advertised! Who would have thought then that there would be such a fantastic recovery resulting in the numbers to be seen today in the UK following some introduced reinforcements? A true success story even if there are still some "local issues".

In France, just as in the UK, the Red Kite was just about everywhere in the 17th century, seen equally over "the streets of Paris as over the streets of London". Again just as in the UK the Red Kite in France and other Continental European countries had declined dramatically by the middle of the 20th century. The decline slowed down in , with population sizes even increasing from the start of the 1970's largely due to the protective measures put in place (with legal protection for all birds of prey in 1972). The Red Kites distribution widened considerably until the end of the 1980's but then started to decrease again in the early 1990's – sadly a trend that continues today despite the efforts of various organisations participating in the national conservation scheme. A 2008 study essentially shows a population decrease of more than 20% between 2002 and 2008 alone.


Faced with the continuing declines the French Ministry of Ecology told the LPO, in January 2012 of the development of a second National Action Plan for the Red Kite. Unfortunately, nearly two years have passed and the document is still not validated which sadly is about par for the course here.

Unlike the UK where the Red Kite population is sedentary,  Red Kites from Germany are fully migratory and French Red Kites are either fully or partially migratory flying mainly to the Massif / Pyrenées area or Spain.

The map gives an idea of the situation. (Hivernant = wintering. Nicheur = nesting). 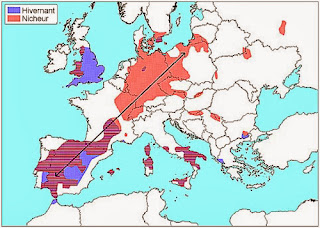 The causes for the decline aren't entirely due to the situation in France and result from a number of factors however a major cause is the use of anti-coagulant poisons in large quantities to kill voles plus illegal poisoning using banned substances. For the year 2013 alone so far we know of at least 34 dead red kites that have been discovered in France and it's safe to assume that there are others. This is a bird that has gone from being of "least concern" in 2004 to "near threatened" in 2009 according to IUCN Red list and I quote here from them.
""The most pertinent threat to this species is illegal direct poisoning to kill predators of livestock and game animals (targetting foxes, wolves, corvids etc.) and indirect poisoning from pesticides and secondary poisoning from consumption of poisoned rodents by rodenticides spread on farmland to control vole plagues, particularly in the wintering ranges in France and Spain, where it is driving rapid population declines"" 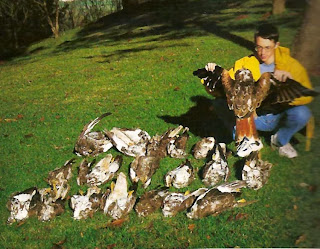 There are other factors, habitat loss, reduced availability of food, illegal destruction and wind-farms play a role and all of these need addressing if we are to avoid taking the Red Kite back to the brink or even possibly extinction given the low population numbers of some 19,000-23,000 pairs across its range.