Living where we do it's highly unlikely that I will see anything but the most common species of either solitary bees or bumble bees and even those are under increasing pressure as almost all the available land surface is constantly plowed for the production of cereals and crops for the animal feed industry. It's mainly the ground nesting species that are suffering although increasingly people also spray insecticides on the solitary species that nest in the outside walls of their houses or block the tiny holes and spaces they use. Many people also spray ground nesting bees in their gardens but I'm sure in most cases this isn't malicious but simply because people don't know what they are or the important role they play in our environment.

Of course even the common species are a joy to me and I see a reasonably large number at our place. Here are a few I've managed to spot so far this spring which given the rather poor weather it isn't too bad.

Male Andrena fulva, Tawny mining bee, not managed to get a decent photo of a female yet, perhaps when the rain stops. 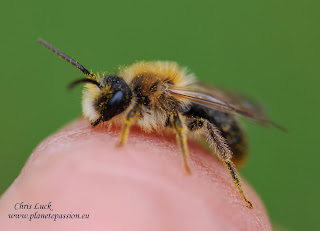 Female Andrena haemorrhoa, Early or Red tailed mining bee. Females of this species are easily identified by the combination of a foxy brown thorax and foxy brown tip to the tail. 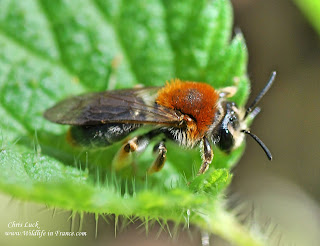 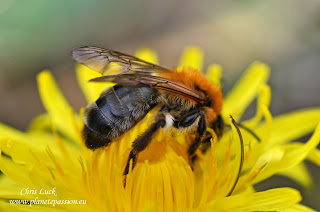 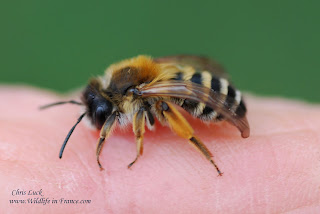 Male Andrena cineraria,  Ashy mining bee. A species that may be benefiting from the extensive cultivation of Oil seed rape in the region, (or in much of France), as only takes pollen from certain Cruciferous plants, (mustards, rapes, charlocks etc). 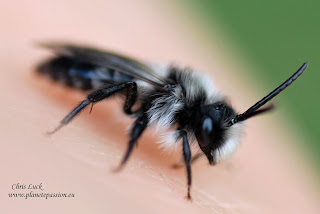 The above Ashy mining bee was found about 20cm, (8 inches), from this Nomada lathburiana, Lathbury's Nomad which is a "cuckoo bee" or cleptoparasite for the Ashy mining bee. The Nomada female detects incomplete host cells which are still open and being provided with food and places her egg in it. When the Nomada hatches it will destroy the egg or the larva of the Andrena species and consume the provisions. 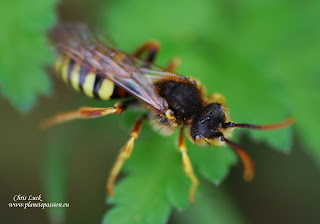 Male Anthophora plumipes, Hairy footed flower bee having a few moments rest from feeding and trying to defend a patch of violets from other males. Haven't seen any females yet this year. 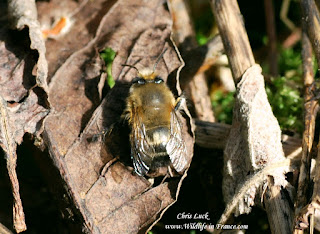 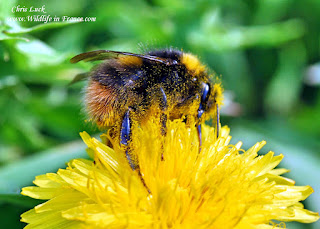 Xylocopa violacea, Carpenter bee. Always plenty of these here, (just let one out of the house that came down the chimney). A docile bee that frightens some people that don't know what they are. 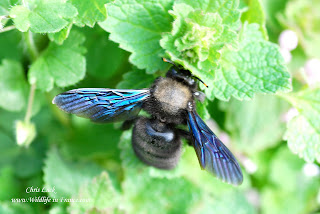 Now when is that rain going to stop so I can go outside and get on with the garden, (and play).