Many will know this highly successful common bug by the name of Gendarme or perhaps, depending on the region, names such as Suisse, Soldat, Punaise rouge, Cherche-midi or Punaise au corps de feu, all of which are widely used French vernacular names for this colourful insect.

As most people will have noticed the "gendarmes" are gregarious and as such live in colonies, which can be described as "gendarmeries", and can number several hundred or even thousands of individuals. Their Black and Red colouration apparently contains a substance that gives them some immunity from predation and as such they make no attempt to hide and even have a very pronounced propensity for collective sunbathing, hence the name of "Cherche-midi". Even in winter on a warm day a sunny stone wall or tree trunk will see them out and about. 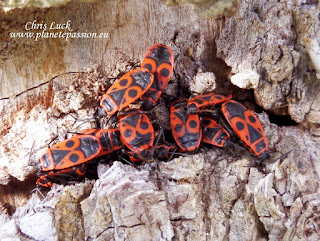 Being well equipped defensively the gendarmes are totally devoid of olfactory cells that provide the "fatal weapon" of many so-called "stink bugs" in the excretion of noxious smells when threatened.

Congregations will frequently be seen at the base of walls, the bottom of hedges and they will often be seen at the foot of trees, especially Lime trees, (Tilia), as they have a taste for the seeds.  The seeds of Hollyhocks, Mallows and Hibiscus are also especially tempting for them and additionally they will eat dead and dying insects. 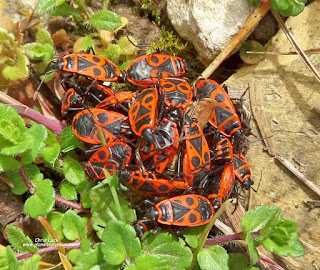 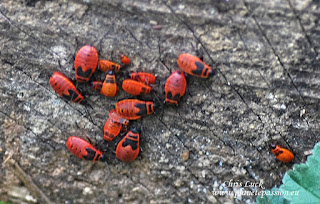 .
They, as with all hemipterans, are equipped with a rostrum which is a beak-like projection that can reach nearly half its body length. These mouthparts are distinctive, with mandibles and maxillae modified to form a piercing "stylet" sheathed within a modified labium. 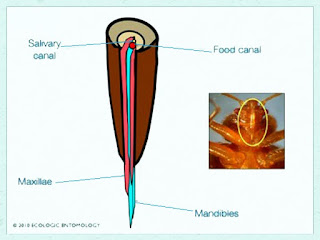 In the case of the Fire bug the sharp needle can be used to pierce hard seeds allowing saliva to be pumped into the interior with enzymes that make the nutrition available to be sucked up as food. When not in use it is folded back under its body and as such is rarely seen or not recognised for what it is. Other true bug species may use this for killing prey or defensively.

Coupling usually takes place from April until August in and they can be seen joined in pairs in a copulation that can last more than 24 hours. There is no biological requirement for this and one could speculate that the male is preventing other males from mating.  Batches of around 50 white eggs are laid and hidden under or in anything handy, a stone, a piece of wood, a fissure in a tree, anything will do. These take about 2 weeks to hatch into tiny yellow larval nymphs with dark heads that rapidly change colour to orange, then red and then red and black as they develop. 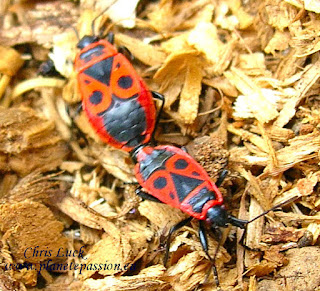 Whatever their stage of development they cause no harm to living plants or insects and are no cause for concern to humans although there is an outside chance that one could prick you with its rostrum if handled but why would you handle one in the first place unless you are like me.

Stink bugs and Shield beetles
Posted by Chris Luck at 13:26

Email ThisBlogThis!Share to TwitterShare to FacebookShare to Pinterest
Labels: Insects

Although the vast majority of Mantis species have their homes in tropical and sub-tropical climates France plays host to a dozen species most of which are in the Mediterranean region, some quite rare and only found in the coastal band.  However the one that most people are familiar with, the Praying Mantis Mantis religiosa, can be found throughout all of and much of continental as far north as .

Without doubt people will be drawn to their two bulbous complex eyes but like many insects they also have three small simple eyes located between them which largely go unnoticed by most people. Although called “simple” they aren’t at all simple. (Human beings have “simple” eyes see link at the end).   Their triangular head has powerful mandibles and can rotate through almost 180° allowing them to remain motionless while looking around.  Their vernacular name comes from the manner in which they hold their spectacular forelegs with hands joined as if in prayer. The importance of these strangely developed forelegs is to defend against attack and to grab and hold prey, never for walking although they may be used in climbing to pull themselves up or hang on.  The males will also use their forelegs to hold the female during copulation. Although rarely seen they also have beautiful wings and can make short flights. 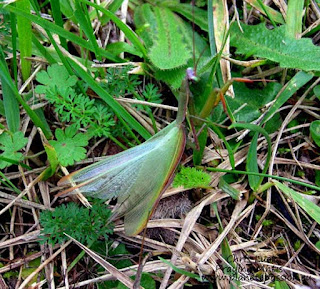 Mantis with wings showing having just landed after a short flight 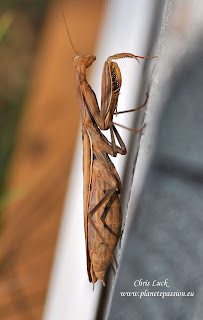 Their Life Cycle is an incomplete metamorphosis, egg, stages of nymph and then adult. They reach adulthood in late summer and mating takes place in August and September when the females release what is known as an Oothecae or Egg case. This is slowly forced out by the genital valves in the form of a mousse which hardens rapidly on contact with the air. In it will be contained some 200 to 300 eggs which will remain there until the following June when the nymphs will emerge in a thin membrane from the central band running down the egg case. This is quickly shed at which stage they already look just like very tiny adults and as they grow they will shed their skin another 6 times before reaching adulthood. Their wings fully develop just before the final moult. The adults die from late October until early December depending on region and weather conditions. 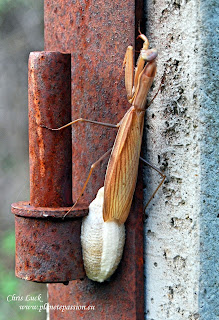 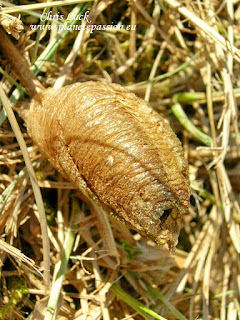 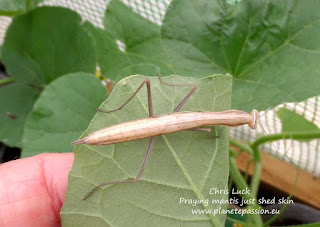 Mantis that has just shed skin 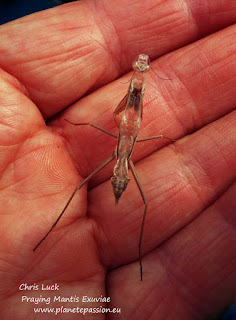 The shed skin of the above mantis 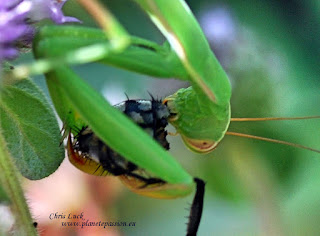 The act of mating itself can last many hours and although it isn’t always the case the female can and will eat the much smaller male when he has served his purpose, photo below. 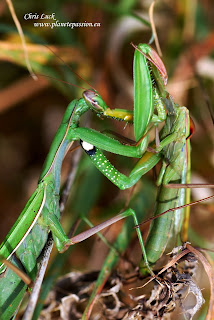 Preferred habitat is rough grassland and scrub but gardens even in towns can be equally attractive for them provided they are insecticide free.

Diet is rich and varied with prey being captured using the forelegs which are armed with a series of angled spines that prevent the prey escaping. In their initial nymph stages they will eat aphids, baby spiders and other small insects but as they grow they take larger insects, flies, butterflies, bumble bees, solitary bees, anything in fact that settles within range of their forelegs. Even instances of small birds and hatchling snakes being eaten have been recorded. 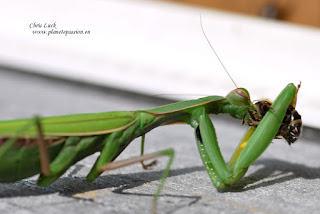 Mantis eating one of my honey bees on a hive front

One more point is that there appears to be no obvious environmental reason for some being brown and some being green, both colours will be found in the same habitat and for both sexes and they will breed with each other.

French Honey bee swarm in August - too late to survive?

Honeybee swarms that issue from colonies that live in hollow trees, cavities in stone walls, roof spaces and such like are always of interest to me as they have invariably developed the ability to survive without all the treatments and manipulations that beekeepers generally use and to my mind these are the survivor bees we need for the future.

This little piece is about one such swarm…….

To my surprise I was called to a bee swarm on the 18th August this year which is extremely late in the season but these things do happen and after asking the caller a few questions to verify it really was a swarm of bees I prepared a ruchette, (which is a small hive or nuc box in English), popped it in the car and set off.

Sure enough, when I arrived there was the small swarm clustered close to the ground attached to an Oleander shrub about 20 metres from the persons’ house where it had come from. Remarkably the roof of the house has three separate bee colonies in it, one on each eave and one in the ridge and they have apparently been there for several years which goes some way to disproving the widely held view that left to themselves honey bees won’t nest close together – these are no more than 6 or 7 metres apart in total. 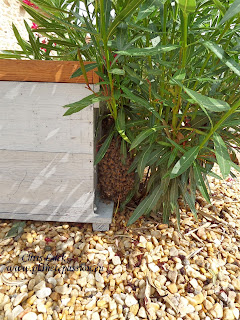 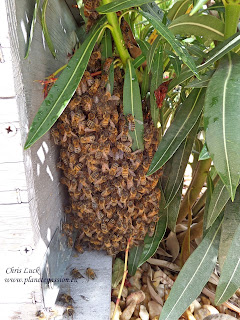 A small swarm at that time of year will almost certainly be a swarm that the colony has produced in addition to its main or prime swarm that will have been larger and earlier in the year. The conventional wisdom is that secondary swarms or after-swarms are issued in the first week or so following the prime swarm and contain a virgin Queen and although normally the first virgin Queen to hatch will kill the others in their cells before they hatch this isn’t always the case and exceptionally over a period of some weeks there could possibly be a 3rd, 4th or even 5th swarm all lead by a Virgin Queen if the issuing colony is severely restricted for space or genetically inclined to swarm which can apparently be the case. There are other reasons put forward for after-swarms but that isn’t really important here as this particular very small swarm had a mated Queen and didn’t issue until the 18th August, (April – June being the normal time period for swarming here).

Housing the swarm in the Ruchette was easy with a little persuasion following which I took them back to my place.

Next there is the tricky matter of giving them a fighting chance of becoming a viable colony at this late stage of the year, something they would be unlikely to have without help. When a swarm moves into its new home it has nothing, no comb, no stores and no brood. This is a period when the bees must work hard and fast in constructing comb, fetch both nectar and pollen to enable the raising of new bees. Even if conditions are good it will be nearly 4 weeks before there will be any new bees during which time the size of the colony will be diminishing as bees die. In this case that would take us to the middle of September when the season is more or less finished apart from Ivy, a few garden flowers and perhaps some flowering cover crops / green manures, phacelia, mustard, fodder radish being the most widely grown, certainly not enough for so few bees to provide themselves with winter stores.

With this in mind the following morning I immediately put a top feeder on with syrup and continued keeping it topped up every day until the beginning of October when I started giving them slightly diluted honey using a simple modification to the inner cap of the feeder by drilling some holes in it to make the honey available to the bees. 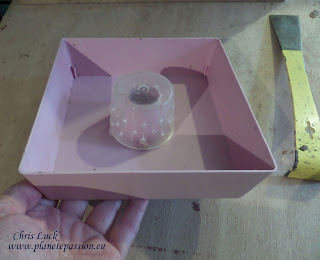 All this feeding has given the bees the ability to increase their colony size and bring the ruchette up to winter weight with stores of honey before the end of October. All I can do now hope that they will get through the winter, especially as they are from an unmanaged colony which as I mentioned at the outset tend to have good survival traits.

In the the Sphingidae family of moths are commonly called Hawk moths and in they all use the word Sphinx as part of their common name.

The simple list that is linked gives their names in English, Latin and French, the caterpillar food plant, annual generations and migratory status, (if any), and a link to photos & distribution for each species on Lepinet.