I know it is stating the obvious but every year is different in the natural world and no two years can be the same, however this is becoming increasingly exaggerated.

Habitat loss, agricultural methods and climate change along with other factors are causing rapid major changes for our native species requiring them to adapt or perhaps in some cases disappear completely.

For some species this is creating opportunities and they have expanding populations that are sometimes associated with an expansion in their range. However for most species there are accelerating declines and this in turn leads to changes of behaviour as species attempt to adapt.

Where I live most insect species have been in overall decline for the last 25 years and this year has been abysmal for them but I want to talk specifically about hornets.

Following the usual slow start as nests were established and populations grew I started to see a gradual increase in both Asian and European hornets in the 2nd half of July and there are presently sizeable numbers of both around the hives and where the bees take water. Of course it’s to be expected that the Asian hornets would be behaving like this but it’s the native European hornets that are behaving differently in so much as they are concentrating their activity on taking honey bees. They always do take some but this is different and I can only speculate that it’s the shortage of all the usual insects they take to feed their larvae. This in turn is putting them more in harms way than would otherwise be the case and I have been finding several dead European hornets in front of hives.

Unlike the Asian hornets that keep their distance I have noticed that our native hornets tend to get very close to the hive entrance, even briefly landing on it, so it was no surprise that when putting the mouse guards back on the hives for winter the other day I saw a European hornet mobbed by a mass of guard bees when it got too close to the hive entrance. The hornet didn't stand a chance but it was 45 minutes before the bees were finally satisfied that they had dealt with her. 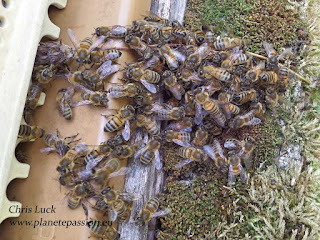 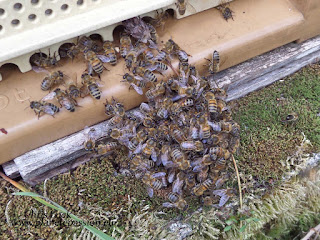 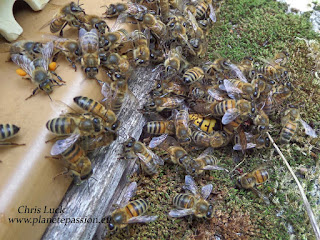 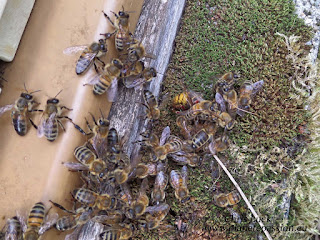 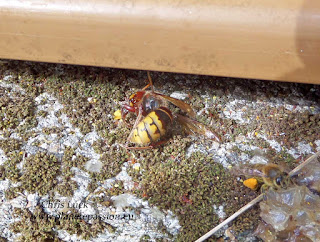 Amazingly no bees died in the process.