Hunt or hunting days in France

There are always people asking what days are the hunting days in and the simple answer is that there is no National law that prohibits hunting on any day of the week during the open hunting season although various Associations keep petitioning for Sundays to be hunt free. 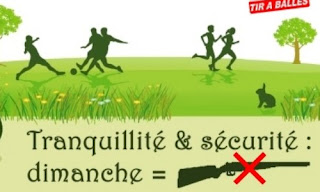 Part of the confusion where it exists is that there isn’t simply one type of hunting or la chasse and that la chasse is often erroneously thought of as being uniquely chasse en battue that involves a minimum number of participants with some driving or flushing through an area using dogs pushing any animals, (boar, deer, fox), out into the open to where one or more hunters wait with guns. Usually this type of organised hunt takes place on two or three specific days of the week that are agreed at the commune level, (ours is Thursdays, Saturdays and Sundays) and the people that participate in this like to call themselves La Chasse.  However rough shooting for smaller creatures, birds, rabbits, hares etc. can take place on any day of the week although in practice Wednesday afternoon is usually avoided due to being a half school day.

To be clear - La Chasse can be defined as using various means in order to capture and kill creatures either for eating or for destruction and no single group of hunters can claim this as belonging to them alone.

There was a brief period from July 2000 and July 2003 when hunting was banned on Wednesdays and this was instituted throughout France at the request of the Minister of the Environment, Dominique Voynet, through Article 24 of the hunting law 2000-698 of 26 July 2000, which stipulated: "Article L.224-2 of the Rural Code is worded as follows: ... The practice of shooting hunting is prohibited from Wednesday to Thursday ".  However in 2003, the repeal of this "no-hunt Wednesday" was included in the bill on hunting put forward by Roselyne Bachelot then Minister of Ecology! It was then voted into law by the majority UMP-UC

The law of 2003-698 of , by Article 27, thus cancelled this provision altogether (which had in the meantime been transposed to the rural code to that of the environment): "The last paragraph of the Article L. 424-2 of the Environmental Code is deleted."

Therefore only the Prefect of each Departement can order days without hunting in application of the article R.424-1 of the code of the environment but in practice this rarely occurs.

Other limits that are set each year at the Departemental level each year limiting or restricting the time periods and numbers of specific species will apply.

Email ThisBlogThis!Share to TwitterShare to FacebookShare to Pinterest
Labels: Hunting

In the Pyrénées-Atlantiques the first photos emerge of a beaver after several centuries of absence for this species in this area of .

In February 2018, a naturalist on vacation in the Basque region of discovered indices of beaver presence on the banks of the Nive at Ustaritz (64) in the form of cut tree trunks and debarked branches. 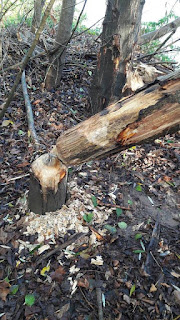 This led to the realization of a joint research by the ONCFS,
Thomas Ruys of Cistude Nature association, a representative of APPMA, (the angling federation), and a local naturalist.

This investigation confirmed that the indices were indeed those of a beaver but didn’t provide any actual sightings of one.
Following these observations of new cutting activity on fresh trees in November 2018, a photographic trap was installed which resulted in pictures of a beaver working on the trunk of a tree!
For the moment only one animal has been identified that is suspected of being an individual dispersed from the Spanish population of beavers present on the basin of the  or perhaps as seems more likely one or more have been introduced clandestinely. 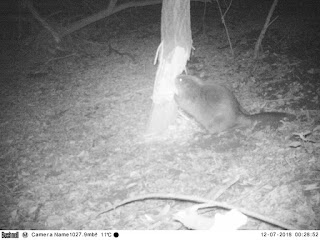 The ONCFS beaver network will continue in the coming months monitoring the sector, as well as upstream and downstream areas, to check whether it is a permanent installation and to try to better understand the dynamics of the species.

The question is has the beaver made a comeback in the Pyrénées-Atlantiques after several centuries of absence or is this a lone example with unknown origins?

Link for Beaver in France

Email ThisBlogThis!Share to TwitterShare to FacebookShare to Pinterest
Labels: Mammals

All the bird calls of France HERE