Up to 25mm in length this huge leafcutter bee is a relatively new arrival in that is rapidly and literally making itself at home and is nicknamed the Squatter bee for reasons that will become apparent.

First observations of this bee in were made in 2008 in Allauch, north of Marseille. Since this date they have spread a long way and in the space of a few years have conquered a territory that includes all the southern half of the country!  The main concentrations not surprisingly follow the valley as far as in the north to the in the south spreading West as far as and East into , and becoming relatively commonplace in gardens south of . 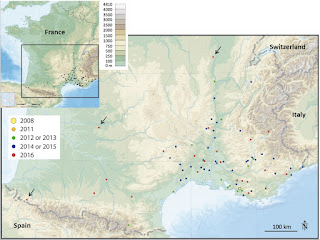 It is thought to have first arrived in a shipment of timber into the from the where the species had been introduced at an earlier date, (first observed in 1994 in ). Originally the species is found throughout the eastern Palearctic and Oriental regions including , , and other parts of eastern .

Although the species is known to fly great distances the main advantages that are aiding their rapid expansion are due to their nesting behaviour and diet. Although some native flowers are used for nectar and pollen collection there is a marked preference for plant species introduced from for ornamental purposes. In some cities like Nîmes and , the pollen analyzed shows a predominance of Sophora japonica ... at nearly 96%! This ornamental tree with white-cream flowers is very popular with city dwellers: it adapts well to polluted environments and grows quickly and despite the name is native to . 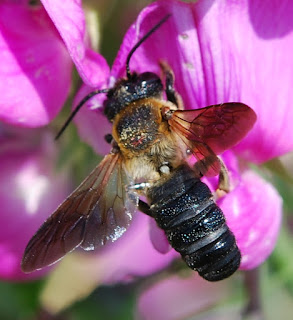 For nesting it mainly uses the large holes that have been made by the Carpenter bees Xylocopa violacea &  Xylocopa valga but unfortunately not only when they are disused occasionally aggressively ejecting any occupant with its powerful mandibles.  A hole of around 10 mm is preferred which females prepare using resin and sap collected from trees although mud and other materials may be made use of. As with other leafcutter species, an egg is placed in a cell, provisioned with a pollen ball and sealed, a process that continues with up to 10 cells, the last which that is open to the air being sealed with a hard coat of resin. After hatching, the larvae feed on the pollen and overwinter in their cells pupating in late spring before emerging in the summer.

They have also been found in a large number of bee hotels where larger tubes or holes are ideal for them.

It’s highly likely that this species will have a serious impact on the ecosystem in both directly on our large carpenter bees and on the available sources of forage for other pollinators.

A Grass carrying wasp and a Mud dauber in France

A couple of interesting introduced species in France that many people will have come across and which are noticeable due to their somewhat unusual behaviour.

Isodontia mexicana known as the grass carrying wasp and Sceliphron curvatum a “Mud dauber” have established themselves rather successfully in France. Isodontia mexicana can be found in all regions and Sceliphron curvatum is so far restricted to more or less the southern two-thirds of the country but the expansion is rapid.  Both belong to the Sphecidae which are a cosmopolitan family of wasps of the suborder Apocrita that includes sand wasps, mud daubers, and other thread-waisted wasps.

Isodontia mexicana arrived in from in the 1960s. For several years, it remained confined to the Mediterranean region, but from 2003, a year which was particularly hot, it began to extend its range northward. It is currently found in , , , and . They are black with smoky brown wings and measure between 15 and 25mm with females being larger than males. The adults feed on nectar with plants such as mint, wild carrot and other umbellifers being especially favoured.

Females use existing holes or hollow plant stems as nest sites where she may create as few as 2 cells or as many as 8 cells depending on space available each cell being separated by plant fragments. Each cell is provisioned with a living grasshopper or cricket that has been paralysed and on which she places an egg thus providing the fresh food the larva requires for its development. Finally the hole is stuffed with dry grass or stalks, hence the common English name. Eggs that are laid late in the season will overwinter after sheltering in a cocoon they have spun (diapause) and emerge in May or June. Early broods at this time of year will produce a summer generation that develops in a few weeks giving us two generations in a calendar year. 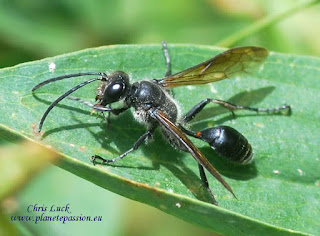 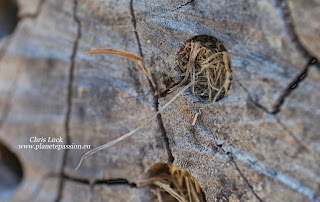 Photos above of Isodontia mexicana & nests

If you have a “bee hotel” and live where there are plenty of grasshoppers there is a very good chance that they will use that. Only significant predators are thought to be birds.
~~~~~~~~
~~~~
Sceliphron curvatum.  The native range of this species extends from to northern and , and from to and eastern .  The evidence points to the fact that it probably arrived in France a little before 2010 when the first confirmed identifications were made following a progression eastwards across Europe starting in Austria in the 1990’s that was not a natural occurrence. .

Adults are between 15 and 25mm. The thorax is black with 2 yellow bands and the abdomen is orange with dark reddish bands.

After mating, the female builds a nest of mud that is made up of several tubular cells, each in the region of 20mm long that are constructed progressively at the same time as being provisioned with an egg and its food supply. Each of these cells is intended for a larva. When each cell is complete, the female hunts and stores enough spiders, usually from 6 to 15 but can be as many as 40, to feed the larva until it is metamorphosed. Live prey is paralyzed, thus constituting a reserve of fresh food. Having laid the egg on one of the spiders she closes the cell with mud. She continues building the nest until it has about 25 cells.

The larvae develop during the course of a few weeks and then turn into pupae in their cell, where they spend the winter. Adults emerge from their cells in the spring.

The nests are often to be found in peoples homes attached to furniture, folds in curtains, clothing and so on. I have sometimes found them between the roof of a hive and the lid and it’s likely that they search out places that are both warm and dry. 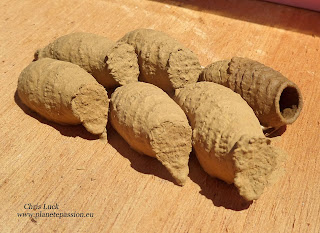 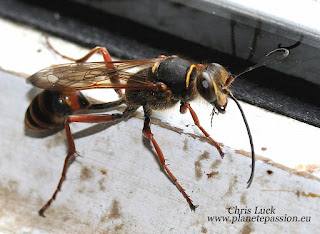 As introduced species it’s hard to say how much impact either of them causes or could cause in the future for indigenous species.

Older French stone built houses invariably play host to a number of species and that includes these fascinating little guests although not all people are thrilled by their presence or their speed when they get a move on reaching speeds of up to 0.4 meters per second.

Although in everyday usage they are called a centipede or “hundred feet” they actually only have 15 pairs of legs when fully grown giving them 30 legs. The last 2 legs are particularly long, longer in fact than their antennae reaching twice the length of the body and can be nearly 6 cm. They use these long legs to form a kind of lasso which is one of the methods they use to capture prey.

Note that the common terms centipede and millipede are never meant to be factual and both are grouped together as myriapods or very many-footed. 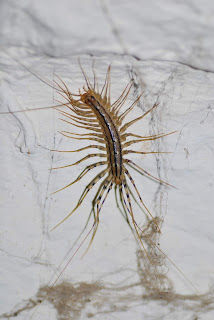 Eggs are laid in spring and the larvae when they hatch look like miniature versions of the adult but with only 4 pairs of legs. They gain a new pair with the first moult and two pairs with each of their five subsequent moults. Adults with 15 pairs of legs retain that number through three more moulting stages (sequence 4-5-7-9-11-13-15-15-15-15 pairs).  They have a lifespan that is from to 8 years with sexual maturity reached in the third year.

Mating can be tricky with the male and female circling around each other making contact with their antennae with this being the only contact they will make. The male then deposits his sperm on the ground which the female collects and uses to fertilise herself.

Prey is killed or disabled using venom that is delivered using Forcipules which are a unique feature found only in centipedes and in no other arthropods. These are modifications of the first pair of legs that form a pincer-like appendage always found just behind the head.
Venom glands run through a tube almost to the tip of each forcipule. It’s highly unlikely that these would be used on a human being unless it was trapped with no available escape such as being held in a closed hand or caught in clothing. Prey can be almost any insect including wasps and hornets and as such they can be a useful creature to have around the home as they quietly go about their nocturnal searches for food.