The Roller in France experiences an exceptional expansion in range in 2022.

The European Roller is a migratory species spending the winter months south of the Sahara. The first ones to arrive in France are noted at the end of April, but the majority of the birds arrive in May when breeding starts immediately, some years from mid-May, but the peak of egg-laying takes place at the beginning of June, late pairs often lay eggs until June 25.

They are a cavity-dwelling species that often uses the cavities dug by Green Woodpeckers and any others cavities it can find in various trees (plane trees, willows, poplar, pine, oak, almond), at a height that varies between 5 and 10 meters. They sometimes will use holes in walls, sandy banks or can even use old European bee-eater galleries (Tron et al., 2008). They do not bring any nesting material into the chosen cavity. The female lays 4 to 7 eggs there, the incubation of which lasts 18 or 19 days. Breeding success is 73%, i.e. 3.6 fledglings per breeding attempt.

After their emancipation, the young Rollers will disperse outside of the immediate nesting zone in the Mediterranean region where they originated. This dispersion classically takes place in the Rhone Valley and in Occitania. However in 2022 this phenomenon has taken on a quite remarkable magnitude with a dispersal covering a large part of the southern two thirds of France, albeit sporadic and localised a situation that is unparalleled in recent decades. Obviously at this stage the reason for this is speculative but one way or another the heat waves that we experienced this summer in France will have been a significant factor with reduced available water and insects. 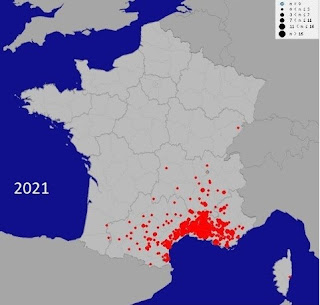 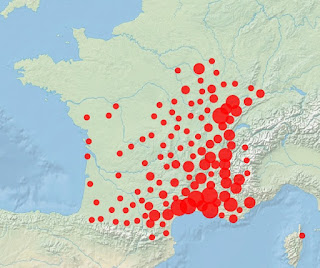 NOTE. A single Roller was seen in Lincolnshire, UK, at the end of August this year, (2022)

It's also worth noting that France is one of the few countries witnessing a population increase for this species that is declining elsewhere in Europe.

Email ThisBlogThis!Share to TwitterShare to FacebookShare to Pinterest
Labels: Birds

White tailed eagles effectively disappeared from France as breeding birds some 130 years ago. They have not nested since 1959, having been subjected to hunting, poisoning, pesticides, water pollution, egg collections and theft of chicks along with the disappearance of wetlands and other human disturbance and since then we have only a few young birds that visit in winter from the east and north east.

Earlier this year in summer four young white-tailed eagles were successfully released from a zoological park in Haute-Savoie in an already successful method of reintroduction.

After disappearing for more than a century, the white-tailed eagle is once again taking its place in the skies of the Alps. This is the case of “Haute-Savoie”. This young fishing eagle - named after the Departement that sponsored the reintroduction program - measures 2.5 meters in wingspan and weighs about 6 kg. According to Jacques-Olivier Travers, the founder of the animal park and reintroduction center of the Eagles of Lake Geneva she likes to perch on the big trees on the edge of the park. 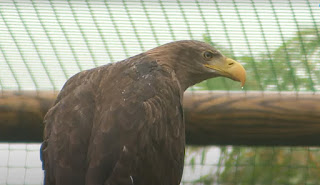 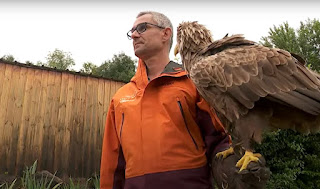 For 15 years, he fought to reintroduce the eagle, now he is rewarded with the first flights of his eaglets."For me, it's the most beautiful bird in the world, but I'm not objective. To see them fly here, in Sciez, where they flew 130 years ago before disappearing for so many years, I think it has enriched biodiversity in an incredible way. It makes me forget all the hardships and 15 years of fighting. Every day, they give us incredible gifts,"says the falconer.

Like three other eaglets, “Haute-Savoie” was born in Sciez, in the aviaries of Jacques-Olivier Travers' reintroduction centre. All of them were opened a few days ago in August to let the eagles take their freedom. Its reintroduction program, totally unprecedented, is now crowned with success.

The young white-tailed eagle reintroduced on August 12 made a flight of 350 kilometers in two days, from Haute-Savoie to Ain via Jura, Oyonnax and Geneva, before returning to its starting point. This whole journey was reconstructed thanks to the GPS beacons installed on the back of the bird.

"It's impossible that he visually memorized the place where he was born. It means that there is something in his head, or maybe magnetic fields, that allow them to leave and know how to find their way back", Jacques-Olivier Travers.

After taking a break for a day, it headed to Switzerland. A spectacular flight, carried by thermals, up to 3,000 meters above sea level. Within ten years, 85 young eagles will be reintroduced to the shores of Lake Geneva.