Sexton or Burying beetles in France

Our house is full of places where animals live and overall we are happy with that and it rarely causes any actual harm although occasionally something dies which needless to say can smell a bit.

Fortunately, as always, the natural world is well equipped to deal with any small corpses that are inaccessible, (as they invariably are), and Burying or Carrion beetles are one of the insects that make their living from such things. There are some 20 odd species in with a total of 30 species in although not all are true burying beetles; some of them eat fungi or rotting vegetation.

This year in September we were finding Nicrophorus vespillo in one part of our house and I would speculate that they had been on a dead , (Edible Dormouse), probably behind the bath or false wall in the downstairs bathroom, one of the places where they frequently live. These amazing beetles can smell a corpse from a vast distance using the highly sensitive hairs on the ends of their club ended antennae. Having found a corpse, usually that of a small mammal, both male and female set about preparing it for use, sometimes excavating below it to bury it or even moving it if it’s small enough. Hairs or feathers are removed as are any eggs or larvae of other species, (flies etc), and the body is shaped into a ball where the beetles eggs are laid around it. Both parents feed and care for the young larvae when they hatch and this can last for up to 10 days before the young can consume the corpse directly. This feeding of the young larvae by adults is very rare in the insect world and is normally associated with social or colony forming species such as honey bees, wasps and ants. In addition to this unusual behaviour the parents are known to regulate the number of larvae in relationship to the quantity of food available on the carcass by removing and killing some larvae if there is a shortage of food or laying more eggs if there is plenty, thus having larvae of different ages on the same corpse. Larvae pupate in the soil or debris under the corpse before emerging between 20 and 30 days later. 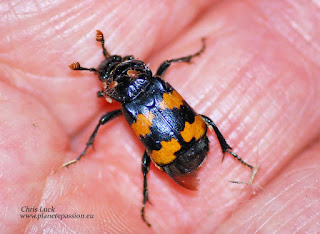 As with some other insects, notably some Bumble bee species, these Burying beetles carry with them several species of phoretic mites that use the beetle as transport from one corpse to another. The relationship between these mites and the beetles has generally been thought to be benign but there is extensive research continuing on what the actual relationships and effects are. Needless to say it’s too complicated a subject for me and to go into here but I’ve put a link below and to a great video.