Voles and holes in France

Gardeners and householders in are forever complaining about the presence of voles in their gardens, either because of the holes they make or the harm they can cause to plants and vegetables. Any harm they may cause depends on the species, some preferring roots and others seeds, grains, leafy plants and even insects.

Although there are eleven species of vole in only a few are of concern to gardeners or farmers. As a general rule these are the Field vole, the Common vole and the Bank vole. The Water vole in its land based form, (known as rat taupier), can have a major impact but they are only present in some regions of . 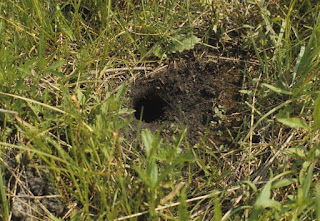 Occasionally some vole species have a population explosion that reaches a peak and then equally as rapidly the populations collapse back to normal or less than normal for a year or more.

What needs to be considered, as always, is the greater good and voles along with wood mice provide the main food source for a large range of creatures and in some cases what amounts to the only food source.

I would think that birds of prey will immediately spring to mind for most people; owls, buzzards, kites and hawks. All will catch and eat voles to some extent and for some they will make up almost 100% of their diet. They are of particular importance for Little owls, Barn owls, Kestrels, Hen and Montagu’s Harriers, all of whom will either not produce eggs or will experience high chick mortality numbers if there aren’t sufficient numbers of voles available.

Most of the snakes that are found in regularly eat voles.

On the mammal front they will be eaten by Foxes, Stoats, Weasels, Badgers, Polecats, Genets, Stone Marten, Pine Marten and European Mink.

Although it may seem a bit callous, the more voles that are available for mammals and snakes to eat the less pressure there will be for them to eat other creatures that are either less able to produce large numbers of offspring or that are already suffering population declines due to other causes.

Due to the harm being caused to other non target species the use of poisons, (rodenticides), in the outside environment was prohibited by law in in 2012. Poisoning to other creatures was being caused either directly with them coming into direct contact with the products or indirectly by the consumption of creatures that had been poisoned.

Farmers in can apply to their Prefecture for derogations to enable them to continue with poisoning fields to protect their crops and sadly this has become normal. It’s also not unusual to see dead small birds around animal sheds where poison grain is being used but that’s a different issue.

These vicious cycles reduce the number of predators for the voles and other rodents and increases the need for poisoning, exactly the opposite of that which is required.