Bees in a bird box and swarm in a house

I have come across plenty of honeybee colonies that have set up home in the roofs of houses, and when necessary, have even been known to remove them when the roof was about to be renovated and it would have been too dangerous for the roofers to work. Otherwise I always encourage people to leave them alone as they present no problems for the homeowners and should be seen as a privilege in the same way as we do when swallows, house martins, wrens and other birds choose to share our property.

I have also seen honeybees nest in all manner of other places, old milk churns, compost bins, in windows and so on, but yesterday, one way or another, was a bonus day, (I’m easily pleased).

An acquaintance called and asked if I would mind taking a look at what was happening at their house where, for a few days, they had seen activity under the eaves on one corner of their house and weren’t sure if it was bees or wasps.

I arrived there at around and really there wasn’t much to see, just a very small number of honeybees floating around showing no particular interest in any one spot. While we were talking another man came up the road who was introduced to me as Andy.  Andy lives just down the road and in the general course of conversation he said that he had bees living in an owl box he had installed. Needless to say I asked if I could see them and my first thought was that they would be Bombus hypnorum,  the tree Bumblebee, (or New Garden Bumblebee as they are sometimes known). He said they were smaller than a bumblebee and when we got there it was abundantly clear that it was a very active honeybee colony. The box, that had been made for Little Owls that are also present in this small hamlet, was placed in a stone wall in the aperture that had once been a small square window. As we moved away from there to return we saw a cloud of insects over a nearby field and as I walked towards them I realised it was a swarm of bees and soon they were everywhere in  an expanding cloud. As they moved off at a moderate speed we followed them up the road, over the roofs and straight to the corner of the house where the original activity had been observed. There we were in the middle of perhaps 15 or 20 thousand bees as they made their way into the roof, and, although I have seen plenty of bees swarming into a hive this is the first time I have actually seen them moving into a roof.
Click on photos to enlarge 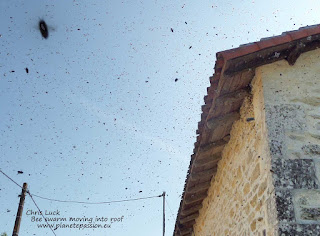 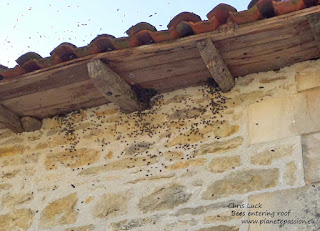 The owners of the house say they can stay there and I hope that is the case.