Usually I don't need to feed any of my bees before winter but due to the bad weather this year, especially the first 6 months, everything was behind with some colonies swarming as late as July with a corresponding slow build up in colony population strength.

As things worked out it wasn't too bad by the end of August although the honey yield was poor, probably only about a third of what it should have been. Most hives were already well loaded and heavy with honey for the winter leaving all of September remaining to forage the ivy which was abundant this year. Ivy, a much maligned plant, is a great source of nectar and pollen for the bees at the end of the season and plays an important role for a number of species.

However I had half a dozen underweight colonies from late reared Queens and I've been feeding these to boost their population size and hopefully get them up to weight with sufficient honey stores to get them through winter but I'm still left with three that are underweight even now towards the end of October. 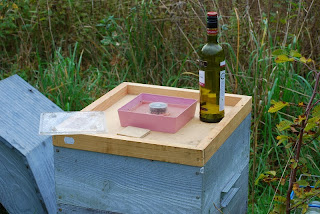 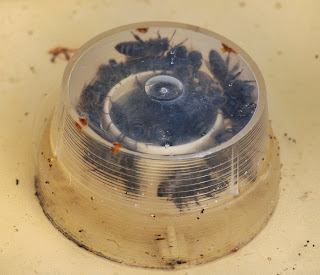 The plastic feeder sits over a hole in the top or crown board of the hive enabling the bees to climb up and take the syrup and the clear plastic cap prevents the bees from actually getting in the syrup and drowning. There are many views on what, how and when to feed bees and I make mine with water, sugar, honey plus a small amount of cider vinegar. In an ideal world I wouldn't be feeding any this late in the year and really need to stop before November.

While I was filling the feeders I had a visitor to the hive top, an Asian Hornet. These are still taking bees from the hive entrances even though there are hardly any bees flying now. 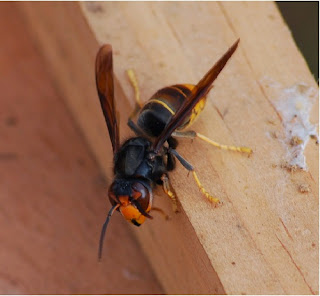 On the good news front an insect that hasn't had a bad year at our place is the Praying Mantis, they go from strength to strength here and every other hive seems have one sitting on it for the last 6 or 7 weeks or so, often right on the hive entrance. Of course Mantis like everything else have to eat and they don't eat many bees really, not enough to worry about. 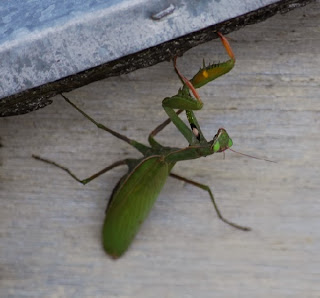