Bee swarms in French windows and removing them.

This year, as is the case every year, I was called to several houses to remove honey bee colonies that had set up home between their windows and closed shutters.

This is a very common occurrence here in whenever houses are left unoccupied for any length of time in the swarming season with the shutters closed, (mainly end of April until the end of June). Scout bees find what for them looks like a great place to set up home and if it wasn’t for the humans it would be. Unfortunately when the humans return to their holiday home or back from a couple of weeks away they find their uninvited guests where they don’t want them to be.

Although this isn’t an ideal situation, unless of course you are happy to leave your shutters permanently closed and enjoy the watching the bees, it isn’t an impossible one providing you can find someone competent to re-home them as quickly as possible. Every day that passes makes it harder on the bees and more difficult for the person removing them; anyway I thought I’d share this one as an example to give some idea of what is involved in a sensitive removal.

I arrived at this house at about in late July having been contacted by Malcolm Harding the key-holder keeping an eye on the property. Doug Hart, bee keeper friend who owns a house locally who was going to give a hand and observe arrived later. The owners of the property were in the and the house was on the market to be sold which meant the colony had to be removed to prevent deterring prospective purchasers. As can be seen it was a sizeable colony and well established, probably between 2 and 3 months.

Honey bee colony in the window from the inside. 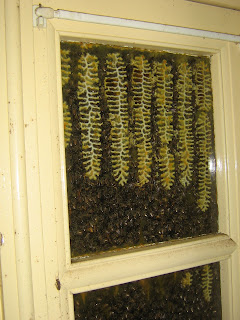 Number one issue was that the shutters lock from the inside for rather obvious security reasons and couldn’t be opened. Number two issue was that the windows were stuck firmly closed by the wax and wouldn’t open inwards. Solution simple enough – smash a pane of glass to reach in and release the shutter bolt that was just clear at the bottom of the comb. Having done that it was possible to carefully prise the shutters open and mercifully they opened with a clean break to the combs where they were attached near the top leaving the colony nicely exposed ready for removal. 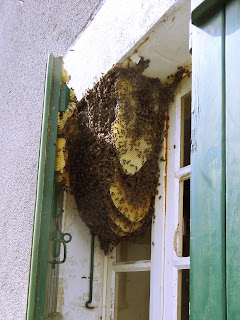 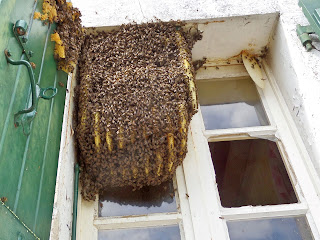 The principle difficulty in almost all cases apart from a very recently started colony is that a large part of the comb structure is filled with honey. As soon as this is handled honey starts to go everywhere and I try to make every effort to reduce the number of bees that end up dying in this and over the years have worked out a very simple manner to achieve this. I take plastic storage boxes and fill the bottoms with old disused fabric, clothing, sheets or whatever. This prevents puddles of honey forming and provides something for it to soak into. I put metal queen excluders across the tops of the boxes to lay the removed comb on which allows any honey to drip and avoids squashing too many bees. The comb that isn’t used for storing honey is filled with brood in various stages, eggs, larvae and sealed pupae, this I try to leave until I have removed as much comb with honey as I can always cutting carefully with a sharp knife into manageable sections. Of course the comb with honey is very heavy and tears easily when moved out of the vertical.

As much comb with eggs, larvae and sealed pupae as possible is wired into hive frames which are placed either in a ruche, (hive), or a ruchette, (nucleus box or small hive), which is where the colony will hopefully be going for transport. I say hopefully because nothing is ever certain in nature and more than once I have run into to difficulties. These old French houses often have cracks or gaps round the window which lead to cavities in the thick stone walls and some of the bees can sometimes hide with the queen. 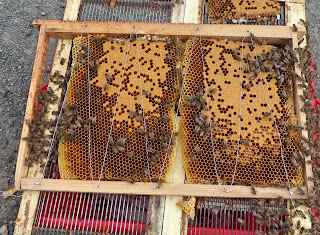 Doug and Malcolm watching the bees while I take a drink 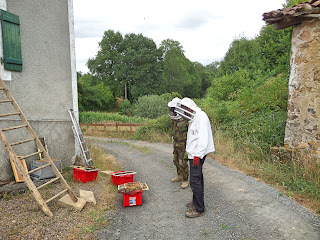 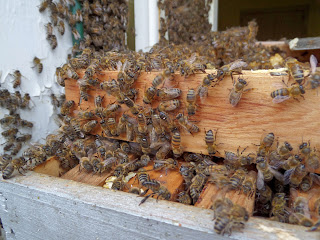 Once the entire comb has been removed the bees have no where to go. If the queen has already gone in the ruchette with the brood comb the rest of the bees will gradually follow. If she isn’t already in there it’s a case of allowing the bees to form a cluster where the comb was, then putting that cluster in the top of the ruchette. This may have to be repeated until the Queen is in. Once she is in the ruchette can be left on the window ledge under where the comb was and by nightfall the majority of the bees will be in and with the ruchette entrance closed they can be taken away to their new home.

The following morning back in our fields. 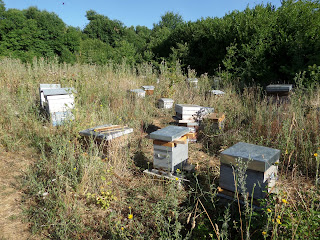 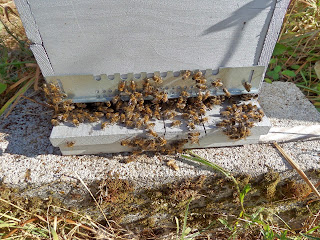 A week later when they were put in a full sized hive they had already filled in the gaps in the brood frames, made a huge amount of new comb and filled it with honey and pollen - happy bees.