Organic or Bio food in France

It would be negligent in the extreme to ignore the importance of Organic food production if we are to be serious about preserving our wildlife and the environment. All of the major French Bird and Wildlife Associations are now forming relationships and working closely with Organic farmers to enable them to be even more “Wildlife friendly” including installing ponds, hedgerows, bird and bat boxes.

Although the consumption of organically produced food or Bio as it is known in France still only represents 3% of the total food consumed both the growth in demand and availability are increasing at an unprecedented rate with sales in 2015 reaching 5.75 billion euros which in itself is probably an underestimate. itself at the end of 2015 had 28,725 certified organic farmers and 1.3 million hectares of certified land.

Of course a considerable amount of the organic food purchased in isn’t actually produced in but is imported from other countries. In some cases this is simply because the food in question couldn’t be grown in France, (Bananas, Coconuts, Pomegranates, Citrus fruits are good examples), or because France simply can’t or doesn’t produce sufficient quantities of some produce which can be for a number of reasons such as not having enough people or land in the given sector or because another country has a better climate and length of season providing greater productivity.

The issue of where the food is actually produced and how it is marketed is needless to say contentious and understandably so. Some people are of the opinion that all our needs should be met by buying local produce from a local producer and this is certainly something that makes good sense but there are limits to what can be purchased in this manner and at best will only supply a small part of a person’s diet. Much will depend on what local producers are present, what distance you would need to travel and when bearing in mind that people have work and other commitments. Many local producers do sell from home whether that be a farm, market garden or their house but frequently with fixed times and perhaps only for a couple of hours a week in addition to which they may be present at one local market a week.
Click photos to enlarge. 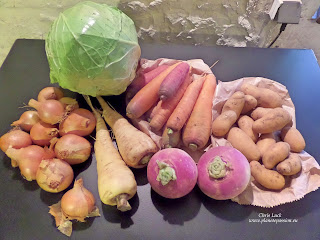 Fresh Organic produce from a local grower.
Depending on where you live there may be a specialist organic or partially organic food /health shop within a relatively comfortable travelling distance and these will usually stock produce from a number of different local producers as well as stocking some produce from further away with dry and pre-packaged foods from other countries. These smaller retail outlets along with some of the growers often provide a more personal service and many will also take orders by phone or e-mail as a “box” service and may deliver to market.  Frequently these outlets will also perform other functions providing a place where people will connect socially or perhaps find information regarding alternative therapies and other less mainstream groups or events. 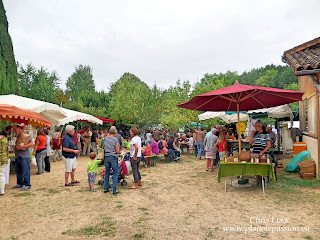 Above: Monthly Organic producers market at an Organic farm. 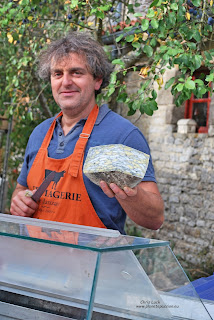 Then we have one of the major drivers of growth in the Organic sector, the Supermarkets that have really started to come into their own in France over the last couple of years and recently some such as Auchan are pushing forwards providing a great range of interesting produce. Many people have fundamental objections to Supermarkets but the reality is that they are of great importance making available to the consumer types of organic produce that they wouldn’t be able to source elsewhere which has to be good for both peoples health and the environment where production takes place. 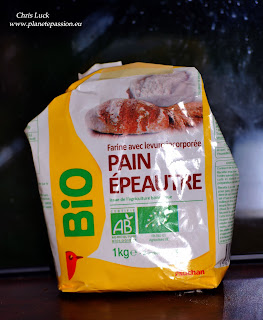 Photo above: Organic Spelt bread mix that can be used either by hand or in a bread machine. 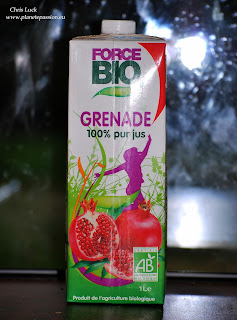 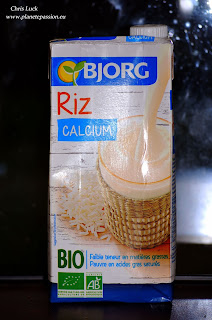 This gives us more or less three different supply lines to the consumer all of which have an equal role to play in providing people with produce that is both kinder to the environment and healthy to use or eat either of which should be a good enough reason to buy organic wherever possible.

It should be mentioned that an argument that is frequently made is that not everyone can afford to buy organic produce but this really isn’t the case and although it may not be possible to “go completely organic” it is well within most people’s budget to make a large proportion of their purchases organic. It may require some changes in lifestyle, perhaps trying different meals that use different ingredients and avoiding fast food. Reducing meat, poultry and dairy consumption will save money and provide health benefits as well as reducing the burden on land use.

With over 40% of consumers in making some organic purchases every week and 10% on a daily basis in 2015 the signs are encouraging and hopefully this will continue to grow. With pesticides and industrial food production being the major causes of environmental destruction leading to both habitat and species loss it’s something where we can all make a real difference just by changing what we buy.

Together we can make a difference.