Found in most regions of France this member of the True bug family is known as an Assassin bug and due to its secretive nocturnal behaviour it tends to go unnoticed even when in your home.

They are especially fond of old houses, barns and outbuildings where they hunt other insects including bedbugs, silverfish, book lice and flies. However they will eat any number of small insects and can also be found in other habitats including woodland, scrub and grasslands but always avoiding the light. Where ever they are they are never in large numbers. 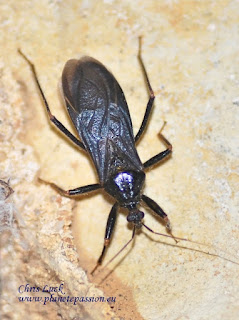 Although they bite and kill their prey by piercing them with their robust rostrum they rarely use this against humans unless handled roughly but if they do it isn't dangerous but can be extremely painful.

They spend the winter as juveniles and then breed in May or June having reached the adult stage.  During their development stages, (instars), they exude a sticky substance and coat themselves in dust and debris presumably to camouflage themselves. 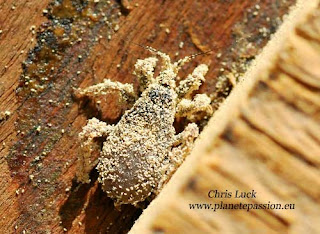 Rather like the House Centipede they help maintain a balance in the home by predating on other insects even though you may not even be aware of their presence.