Wax moth and Honeybees in France

Wax moths of both species Achroia grisella and Galleria mellonella which are commonly known as Lesser Wax Moth and Greater Wax Moth have one brood per year but this leads to successive generations as they complete their life cycle and the offspring breed. The adult moths live for about a week and are mainly nocturnal.
.
In both cases the development time between egg and adult hatching is temperature dependent and can vary considerably but can be as little as 45 days with an average daytime temperature of 28 – 30°C  but can take up to 7 or 8 months. Essentially higher temperatures speed up the development. Eggs always hatch in less than 2 weeks and it can be as little as 2 or 3 days.  The larval, (or grub), stage has the most flexible lifespan and generally the longest, anything from about 4 weeks to 6 months and of course as any beekeeper knows beeswax is their food. 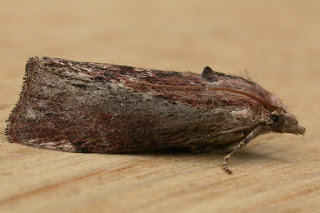 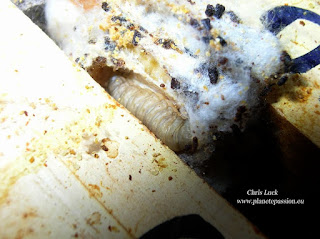 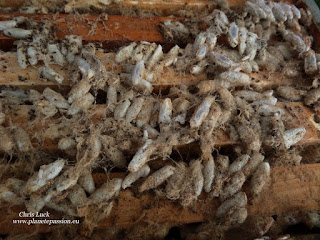 At no stage in their life cycle can they tolerate temperatures in excess of 45°C or below 0°C. This is important to know for beekeepers as it provides 2 methods to be certain that frames are clear of them. The frames can be frozen if they have comb in them and they can be gone over with a heat gun if they have no comb in them as can the interior of the hive.

So we can see that there is really not a huge difference in their basic biology and life cycle.

Now we come to the frequently misunderstood question of honeybees and wax moth.

Anyone that knows anything about honeybees will know that they are fastidiously hygienic in the management of their colony and the space it occupies including sealing all un-required spaces, holes and fissures with Propolis as well as coating the entire enclosed interior with a thin coat of it. Any damaged or unhealthy bee larvae and bees are continuously removed from the colony.  What this means is that there is absolutely no chance of wax moth establishing themselves in a healthy colony. Should a female moth sneak her way in and lay a few eggs they will be quickly dealt with. Any eggs that escape the cleaners and manage to hatch will be dragged out of the colony and dumped outside or if they are wedged in a small space they will be coated in Propolis.

Only when a colony has failed and died or is at the point of dying can wax moth move in and their larvae consume the old wax. This will not prevent a new swarm from occupying the hive or empty space; they will happily move in and within a day or two will have ripped out the entire damaged comb with any pupae and larvae that are present. 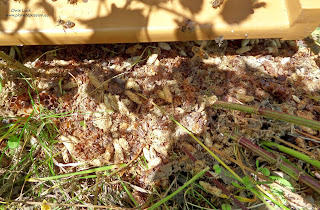 Another possible point of entry for wax moth is following the extraction of honey from the honey supers, (the boxes that are placed on top of the main hive to collect honey). Careful extraction should result in very little damage to the comb allowing the same comb frames to be used again which requires that these be stored and kept in good condition over winter. Different beekeepers have their own methods of dealing with the extracted frames, some putting them back for a short while either over or under the actual hive for the bees to remove all the residual honey. I’m not a fan of this as it creates extra work with no obvious merit and as such I prefer to store my extracted frames “wet”, that is to say with the residual honey left in place on the frames. When these go back on the hives the following spring it encourages the bees to clean and restore any damaged comb.

The important thing is to store them free of wax moth by keeping the supers with the comb frames in them sealed immediately after extraction. This is not complicated, requires very little other than a little preparation. Bearing in mind that “wet” frames will drip a little I use a plain metal hive lid to put underneath and either another or a piece of flat plywood to put on top of each stack of supers making sure there are no gaps. Whether the supers and frames are stored “wet or dry” the same principle applies of making sure they are stacked and sealed immediately and not left lying around open to the air.