It’s not unusual to get called out to bee swarms and colonies between the windows and shutters of French houses. It is after all an ideal space if the shutters are closed.  The other day I was called to one in a Chateau, all very straight forward with a nice sized window for the Ruchette, (small hive box).

Victoria, the woman from the Chateau, wondered if they had come from the bees in the large section of Lime tree trunk from the tree that they had cut down in the late autumn.  Immediately she had my attention and so the story unfolded. It seems the tree had to be cut down as it had become dangerous having split in a storm. They insisted that the section with the bees in it be cut out in one large piece and this was later moved to a suitable location in the grounds with the open ends covered up to provide protection but with enough gaps for the bees to come and go. Walking down to where it was I was impressed by the size of it and although it was laid flat on the ground the bees had obviously made the necessary adjustments and were happily going about their business. 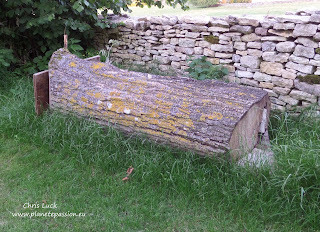 Maybe not the standard idea of a log hive

Then it turns out there is another honeybee colony high up in one of the chateau towers walls which it seems is always occupied by bees. Of course this may not be a continuous occupation. More likely that from time to time the colony fails and the space attracts a future swarm as is usually the case. 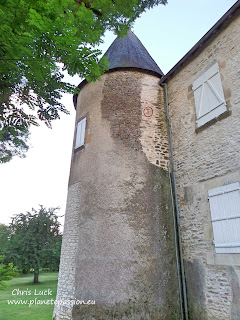 Honeybee colony in the tower wall, entrance circled in red.

The colony that had set up home between the window and shutters was easy enough. They had been there a couple of weeks or probably a little more. Strangely there was quite a lot of brood but no honey and only a little pollen.  They are now safely in my apiary where they are very busy on the Sweet Chestnut that has just started to flower. 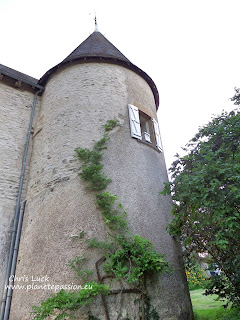 Ruchette in the widow, bees happily inside and waiting for me to take them away.

I must add that it’s a great joy to meet people that care about the other creatures we live with and make every effort to accommodate them. Their buildings and grounds are a little wildlife haven.