It’s not that Asian Hornets venom is anymore toxic than our native hornet and wasps, or even that they are more aggressive away from their nest. It’s more about where Asian Hornets are increasingly choosing to make their nest.

I’ve chosen a few recent cases to illustrate this.

In Montmorillon, , a 76 year old man was stung more than 30 times by Asian Hornets in his garden when cutting a small hedge outside his house on .
When his wife came to his assistance he was covered in hornets and she was stung 5 times before neighbours arrived with thick clothing and managed with the use of wasp sprays to get him away from them. He was transported to the hospital by the Pompiers to receive treatment. 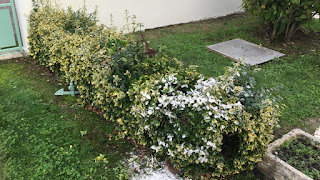 The couple had never noticed the presence of the hornets in the hedge which is about 50cm high.

Earlier in the year on 1st August, in the Nantes area another man was stung more than 10 times when he disturbed an Asian Hornet nest in the water meter box and fortunately suffered no serious effects, however the day before at Grayan-et-l'Hôpital, Gironde, a woman died following multiple stings when she disturbed an Asian Hornet nest at about 1.5 metres from the ground when going to her post box.

In these and most other cases attacks occur when nests are disturbed, whether that is Wasps, Bees or Hornets. I have myself suffered the consequences of putting a brush cutter into a wasp nest at ground level and know how easy it is to hack away without first looking for any obvious nest activity.

What’s becoming increasingly clear for anyone that has been following the evolving situation with Asian Hornets year on year is that they are increasingly making their nests close to the ground. This inevitably leads to an increase in attacks. (European Hornet nests are always under cover in buildings or hollow trees making accidental disturbance less likely).

Other than in a handful of cases a year in very few people actually die from stings.