A few French frogs and newts at Chaunay.

When the LGV from to was being constructed there were a large number of environmental impacts that had to be considered as a matter of law these days and I will go into them at a later date. Here I only want to touch upon one site, Le bocage humide de Chaunay a wetland site site in the south west of the departement of some importance.

All in all at this site some 120 hectares were purchased by Réseau ferré de France, (RFF), which is the company that owns and maintains the French national railway network.  The land is comprised of moderately managed small copses and hedged fields that have been cut for hay. It’s something of an exception among the wetlands of the department. With no connection to any river an alluvial aquifer feeds directly into the pools and ditches creating large area of seasonal surface water. With a handful of man made ponds left in existence another 7 have or are being created on the 45 hectares that have been contracted to CREN, (Conservatoire d’Espaces Naturels de Poitou-Charente), for 25 years. CREN in turn are establishing a management plan with farmers that use the land regarding types and timing of any hay cutting that will take into account the various species present.

The site is particularly rich and includes some of the rarer and endangered amphibian species that have been lost in huge numbers due to the vast destruction of ponds and habitat throughout the region over the last 50 years or so.  I bet like me you must get sick of hearing this, everywhere we look it’s the same old story and sadly not getting any better.

Anyway, on a positive note this particular site is relatively safe although there are some issues that will be difficult to resolve as we shall see.

When observing or compiling records for amphibian species at any given site it’s necessary to do this at night essentially combining two different means. The first is to listen and identify any of the frog or toad species present. To do this, having approached the pond, we then turn off all lights and wait 5 minutes as little by little they settle down and get back into their calling. As with most other creatures each species has its own unique call and for some it may be the only way we can determine their presence.

Next it’s light and time for a careful search in the shallow margins. The water will be slightly warmer here and it’s where mating takes place for most amphibians. For many species there is no need to actually capture them, simple observation is enough, indeed strictly speaking it’s illegal to capture them without being authorised and absolutely illegal to deliberately harm or move one.

Of particular interest is the Triton de Blasius a hybrid newt that results from the mating between a male Great Crested Newt, (Triturus cristatus), and a female Marbled Newt, (Triturus marmoratus), which obviously requires the prescence of both species. Biologically the males are sterile and females only partly fertile. There is no typical Blasius but the essential features are the back with the markings of a Marbled Newt and the belly of a Great Crested Newt.

Photos below of Triton de Blasius. 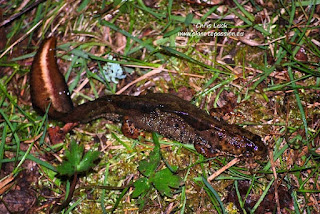 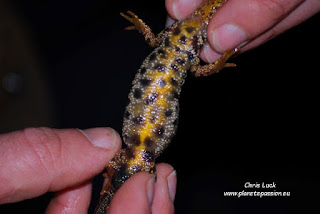 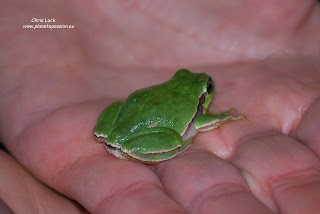 Photo below of an Agile frog 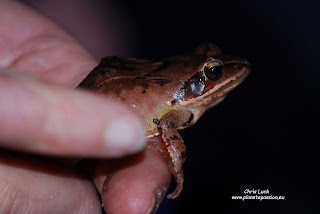 Photo below of Female Palmate Newt 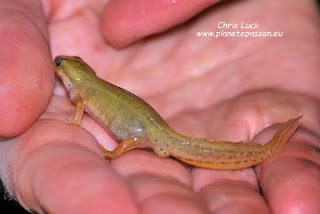 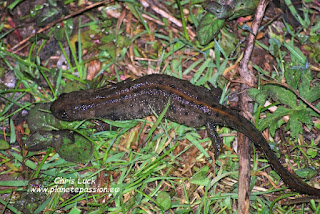 Other species are also present at the same site - Marbled Newt, Common toad and Parsley Frog.

There remains as I mentioned one not so small issue and that is the presence of Procambarus clarkii, Red Swamp Crayfish  an introduced species from the USA. This species can reach 85-90mm total length and are aggressive in behaviour presenting a threat to the native amphibian species that are there. Due to  the protected nature of this site only authorised trapping can take place but as it is a species that will move through ditches and indeed overland in wet conditions total eradication is unlikely. 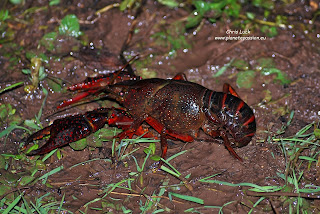