Caterpillars can be some of the most spectacular and pretty creatures that we can encounter here in France and the caterpillar of the Goat moth, (Cossus cossus), is a classic example and it's the caterpillar that gives this moth its name as it emits a strong and rather unpleasant smell reminiscent of a male goat although having handled a few I’ve never been aware of it myself.

The moth has a wingspan of 9cm or so, have light grey wings which are covered in black speckles.  Sadly I have never seen one and it may well be that there aren’t many where I live, (my wife did see a caterpillar about 10 years ago on a nearby track but nothing since), however this isn’t so unusual as apparently they aren’t regularly observed and the moth doesn’t feed. By all accounts they aren’t a common species and as we will see the larvae are regularly destroyed which may account for their decline.

Twice a year in May and October Hope Association holds a three day fund raising event at Clussais La Pommeraie in the Deux-Sevres departement of where I have a table selling my honey. Some years ago my attention was drawn to a caterpillar someone had found and it was unmistakably that of a Goat moth that seemed likely to have emerged from a large Oak tree that is directly in front of the building that is used for the event. The tree had some damage in the form of exit holes but not a huge amount but this year when I was there a few days ago there was sawdust all over the ground at the base of the tree and clinging to the bark. Of course it’s probably nothing different from any other year except that this year we haven’t had any significant rain to wash it away.

“”The eggs are laid, usually in small batches, in crevices or on bark of living trees near old burrows or other damage. Young larvae enter the tree, at first remaining under the bark, later boring deep into the wood on which they feed. The slow-growing larvae do not become fully grown until the third or fourth year. The burrows of the fully grown larvae are circular in cross-section and up to 20mm in diameter. Sap often seeps from the holes the larvae make at the trunk’s surface, with frass ejected from these, often accumulating at the base of the trunk. Trees can support one, a few or perhaps many larvae. Severe infestations can kill the tree, but this may take several years. In their final autumn, from August onwards, some larvae leave the tree, hibernating in a silk-lined cell in the ground. Other larvae remain in the tree. Pupation takes place in April and May, the larvae in the tree making an exit ‘window’ in the bark by gnawing away all but the outermost surface before making a silken cocoon in which they pupate.””
(Source: Butterfly Conservation.org)

There is no doubt that they can cause serious harm especially to fruit trees, usually older ones that have surface injuries and are considered to be an agricultural pest in orchards however in the case of large oaks the tree should be able to support their presence in the same way they do the larvae of Cerambix cerdo - Le grand Capricorne.

A few photos of the tree concerned and one of the caterpillars from it. Click on photos to enlarge. 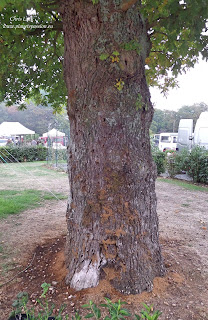 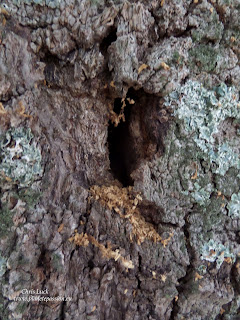 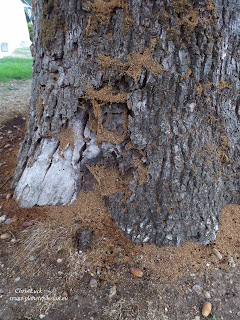 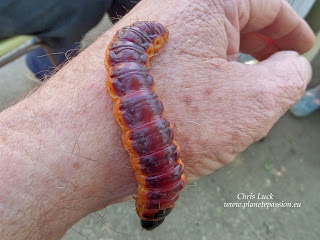