It’s that time of year again when the bees are swarming and I’m busy collecting them or at least trying to in my own apiary. It’s also the time of year when the phone starts ringing, usually because people have a colony of bees that has taken up residence somewhere in their house and this is something I've been meaning to put in print for years.

To start I’ll provide a little simple background on what a honey bee swarm is and why they do it as it’s not something everyone understands or knows about unless they keep bees.

A honey bee colony is a group of bees made up of tens of thousands of individual insects that are continually dying and being replaced, the bulk of the bees are “workers”, (sterile females), with a smaller and more variable number of drones, (males), depending on the time of year and usually with one Queen, (there are exceptions to the latter but that’s not important here).

Being a colony or a functioning whole it has to find a way to reproduce itself, this is achieved by splitting into two and this is where swarming comes into play. It has to divide because in the same way that individuals die entire colonies will also fail, (die out), from time to time and balance needs to be maintained.

Following the winter and usually sometime around the middle of April until the end of May the colony population should have grown back to full strength – what this is in numbers will depend on the specific genetics of the colony and how much space they have but could be as much as 70,000 bees or even more.

At this point it is likely that the colony will prepare for swarming and then usually on a warm day, often between 11am and 3pm, the existing Queen will leave the colony with about 50% of the colony, fly a short distance and form a cluster hanging on just about anything, a bush, a branch, a fence etc. Mostly this will be comprised of young bees that have filled up with enough honey to meet the needs of the coming 10 to 14 days while they find and start to construct a suitable “new home”.

THIS IS THE TIME TO QUICKLY CALL A BEEKEEPER WHILE IT IS INTHE OPEN AND ACCESSABLE.

The swarm will remain suspended like this for as little as 20 minutes if they have already chosen a new home or for as long as a week or even more if they struggle to find somewhere but speed is of the essence in having them captured and collected !! 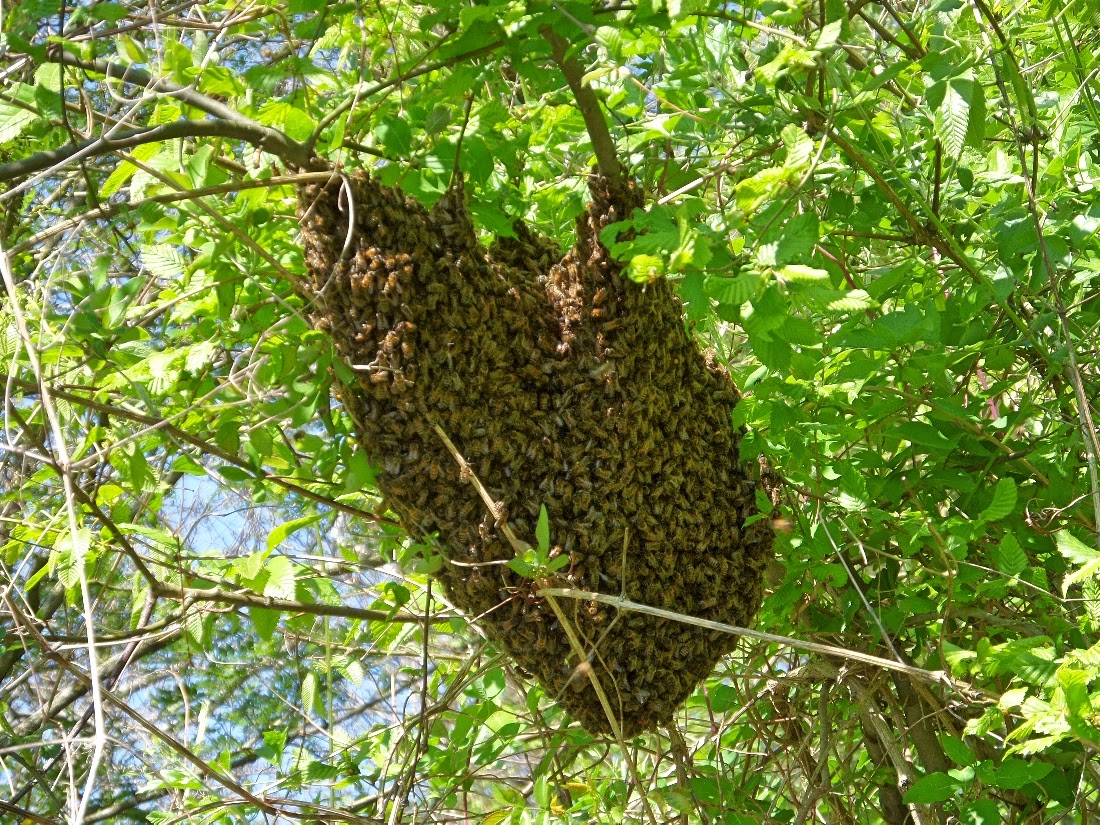 So if having failed to capture them for one reason or another they will in most cases quickly find somewhere to install themselves, move in and immediately start to make comb. Comb construction is rapid, it has to be because they have nowhere to put stores and nowhere for the Queen to put her eggs and new bees to be raised. They will always occupy an enclosed cavity apart from when exceptionally they fail to find somewhere suitable. These “cavities” can be almost anything, a hollow tree, a compost bin, an old discarded water heater or other drum, an old wine barrel, the list is endless but over the last 10 / 20 years they have been increasingly using peoples houses in rural France and there is a perfectly logical explanation for this connected in large part to the arrival of large numbers of immigrants, mainly from the UK.

These immigrants when they arrived from the immediately saw the potential for “renovating” all these old rustic stone properties which included converting the open greniers, (the upper floor), into living space. These open upper floors had traditionally only been used for storing food and other items and provided nowhere interesting for bees. So with these conversions and modernisations various new places for honey bee colonies have been created, notably in the space between the boards that support the roof tiles and any fitted ceiling that follows the line of the roof, any plasterboard dry lining that leaves a space between it and the house walls and in the space that is left when the outside and inside house walls are built up to the roof, (this space of perhaps 15 to 20 cm was traditionally left open), and in chimneys that have been fitted with a wood burner flue or with some other cap that gives the bees something to build in. Oh, and one more place particularly in houses that are left empty, the space between the window and the shutters if they are left closed. 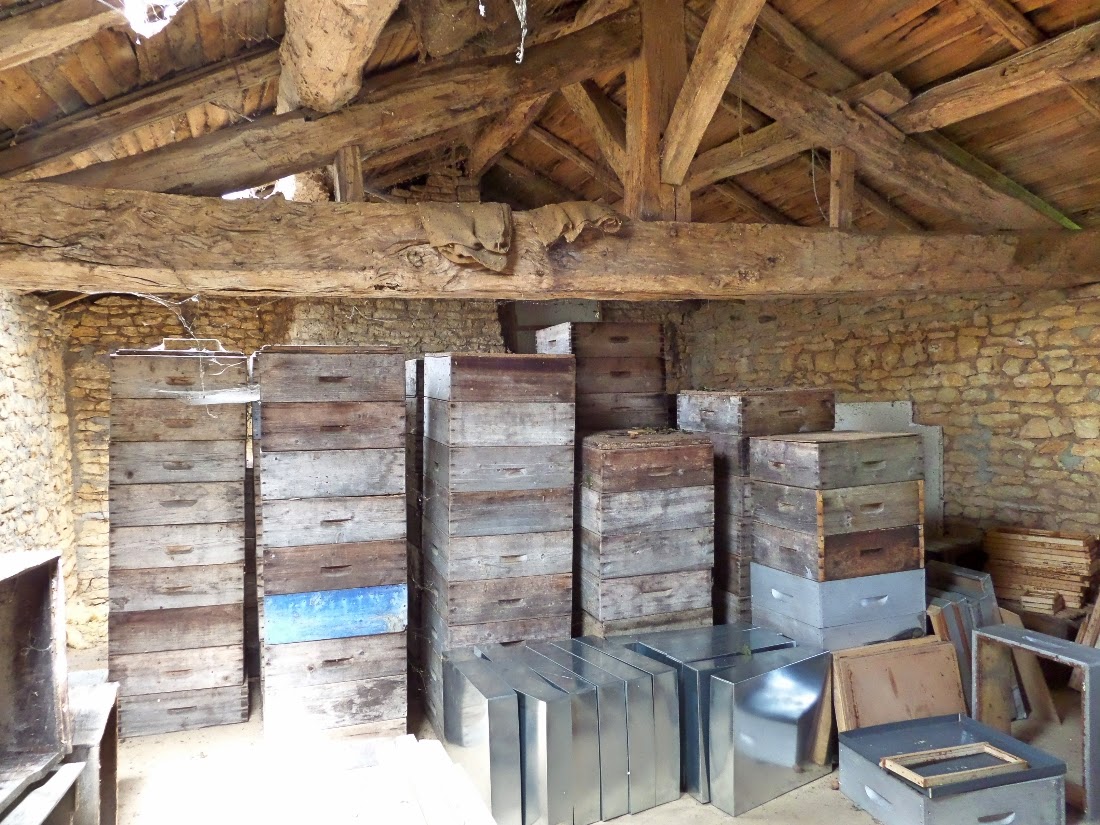 Given that to remove a honey bee colony it’s necessary to gain access to the entire comb structure, AND DON’T LET ANYONE TELL YOU OTHERWISE, the practicality of removal will depend on exactly where it is. People will talk of “trap outs” and “bleed outs” but none of these removes the colonies and only traps the foraging bees leaving the Queen and colony core in place.

Starting with the relatively easy type between window and shutters this in my experience can usually be dealt with starting in the late afternoon and finished by dusk but may well take longer if well established.

In a roof requires removing a section of roof or interior ceiling, usually possible but not always straightforward depending on the exact situation, (I no longer go on roofs to remove bees although I have completed a large number of removals “from above”). It should be possible to complete in a day or two.

Behind plasterboard is the same, it requires removing a section of boarding, should be reasonably OK and maybe up to a day or twos work.

Same again if in any cavity formed at the top of the exterior wall if it’s possible to get at without too many complications.

Removal from chimneys as a rule is out of the question. 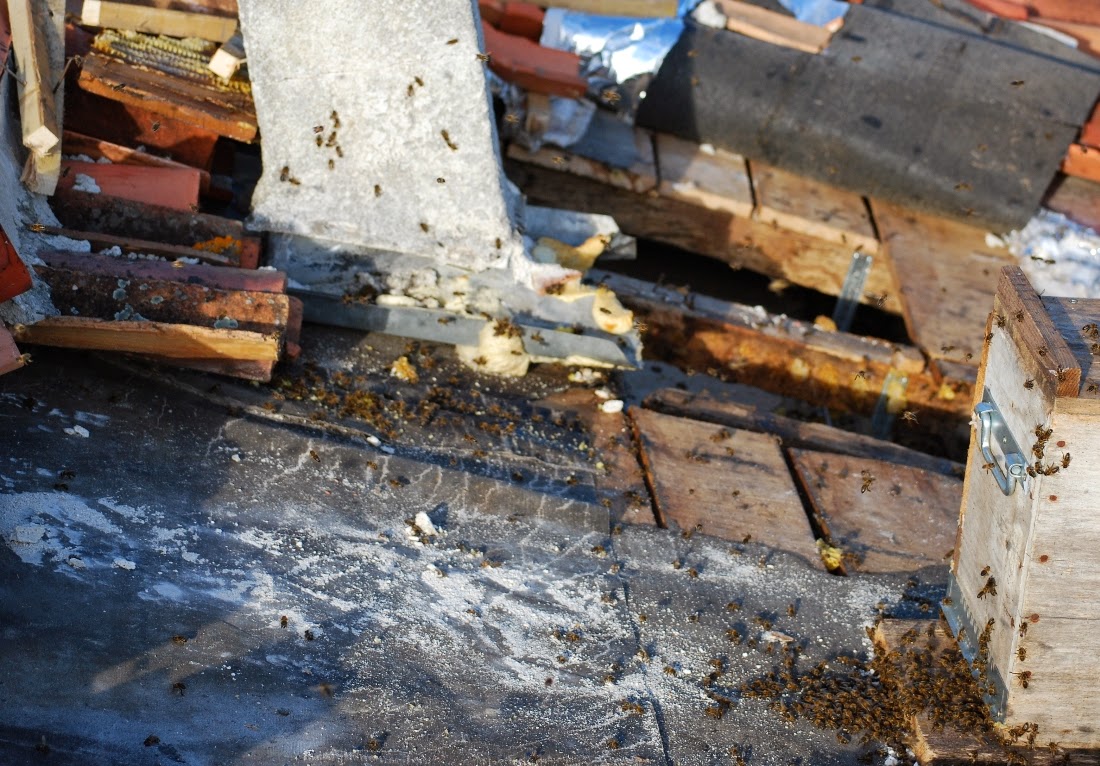 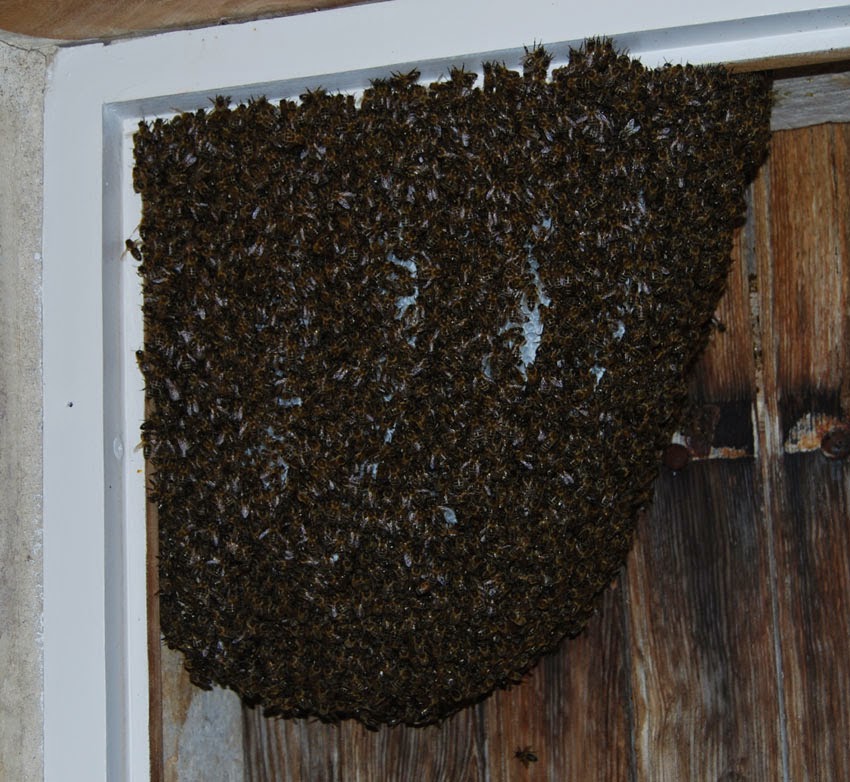 Now we come to pre emptive measures and solutions and obviously it’s best as with most things in life to prevent rather than having to cure.

As already mentioned should you see a swarm of bees clustered outside anywhere call a beekeeper immediately and without delay - LISTS HERE.

Should you notice bees congregating or flying around your chimney light a slow smoky fire and keep it burning throughout the hours of daylight and do this until all bee activity ceases, you can also try this during the first few days after a swarm has arrived with it has to be said mixed results. It won’t work once the colony has settled in.

Should you see bees congregating or flying around cracks or holes in your house walls or in your roof and providing it’s an accessible area you can stuff wads of kitchen roll or something similar soaked it cheap perfume, aftershave or deodorant into the crevices etc. this should deter them in most cases.

PLEASE DON’T START SPRAYING THEM WITH DOMESTIC PRODUCTS THAT YOU CAN BUY IN THE SHOPS AND THEN EXPECT A BEEKEEPER TO COME AND SORT OUT THE PROBLEM WHEN YOU FIND YOU HAVE A LOT OF ANGRY BEES.

Finally if all else fails and removal isn't a viable option I would suggest that you just live with them and be happy, consider it a privilege, large numbers of people do and if they are in a roof they soon forget they are even there. Contrary to many popular myths they don’t chew or eat their way through you building / ceiling or whatever. The honey doesn’t pour out and through you ceiling etc unless you or someone pokes the colony about – if honey fell out of the comb evolution would have changed it a long time ago. They won’t swarm all over you and sting you as long as you don’t get too close to the entrance to the colony which is unlikely if they are in your roof – they only get defensive about their home not when they are out and about foraging so it’s really no different from having a hive in next doors garden.