Beetles in the Firewood in France


Every year in , usually from about February, some people find their houses invaded by small red or reddish-brown beetles. This is by no means everywhere and many people will never see one, however where they are present they can sometimes be observed in relatively large numbers. 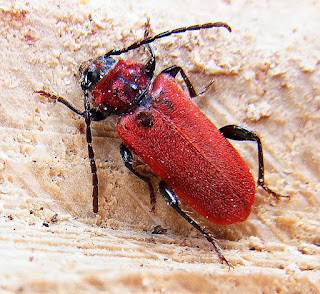 The creature concerned is a Longhorn Beetle, Pyrrhidium sanguineum, although being only 8 to 12 mm it is rarely recognised as being one. Known in English as Welsh Oak Longhorn Beetle and its common French name is La Callidie Sanguine).

Females lay eggs in crevices in dead or freshly cut wood with bark that is exposed to the sun from March – June and are polyphagous in nature using a range of deciduous trees, but with a preference for oak (Quercus spp.).  Larvae burrow into the timber making galleries up to 60cm in length where, when fully grown, they pupate.  They can’t use seasoned timber and usually have an annual life cycle, occasionally this can be two years.

When this wood is stored or kept for a while in the home or perhaps a garage as firewood the adult beetles tend to emerge earlier due to the higher ambient temperature. Where firewood is stored outside in proximity to the home they may be seen a little later in the year when it is warmer.

Fortunately for us we don’t need to worry as they are completely harmless in our homes and can be popped outside where they belong.